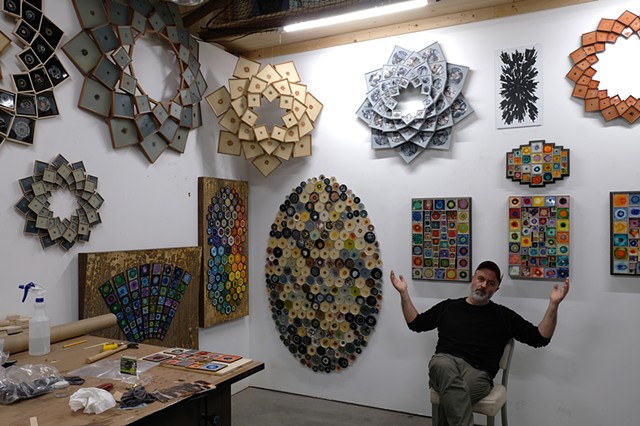 Nature plus time and weather is really my favorite kind or art. I can only emulate that by creating a space for materials to interact so it seems like something that could have happened regardless of my presence. The results often allude to other natural phenomena. Whether it’s tree rings or particle physics, a single cell or an electrical storm, I try to corral all those inferences into one story of mutual interaction. What does a feather say to a nebula? Is a brain scan a comment on cell division? There’s something in the interplay between the order and chaos, spanning the galactic to the atomic, that I’m trying to catch a snapshot of.

Most of the recent works I’ve grouped as Malgamations or Mandalas.  Malgamations are like creating individual puzzle pieces then figuring out how they all fit together. The necessity of having strategies for being present in the moment and not distracted by thinking about the end result. Malgmations have no real plan. It’s an intuitive and aesthetic interaction, mining combinations, seeing where the pieces want to go. Since the start of the pandemic, the colors have gotten brighter, the differences between the panels more pronounced. They reference cognitive states, internal dialogs, and neurological processes.

And Mandalas, not in the sense of any particular religious tradition, but as objects that invite contemplation or wonder; a thing to get lost in. Many have nothing at their center except for the blank wall upon which they rest. A collection of individual universes, each with its own particular mix of elements, circling a calm emptiness. Mandalas have a more defined plan and endpoint. The builds are complicated and precise. The color palette is more muted and natural; the differences between the individual cells are more subtle. The names reference neutral physical attributes, although the most recent one, Gray Matters, has a double meaning that bridges the two groups.